You are here: Home / FOX / FoX Friday with Sarah Hegger!

Happy FoX Friday, my lovelies! September crept up on us fast, didn’t it? Are you ready for autumn, because I sure am. 🙂

This week, I’m super excited to welcome back author Sarah Hegger, a/k/a the Other Half of My Brain. Sarah’s latest release, Conquering William, is my new favourite in a series that I already love. I guarantee you’ll fall in love with William and Alice. Here’s a bit about the book.

He married for convenience, but William of Anglesea had hoped for more than piety from his new bride. Raised in a convent and thrice widowed, prim Lady Alice of Tarnwych seems like an innocent when it comes to the marriage bed—except for the tentative passion he senses in her touch, and sees in her eyes. It seems the bold knight has a new challenge in alluring Alice. But will seducing his intriguing wife lead to his downfall?

Everything about charming, free-spirited William defies the cloistered world Lady Alice comes from. Duty brings her to their bed—and a long-held hope for a child. Yet after three indifferent husbands, the desire William shows her awakens her own. Little did Alice expect the powerful feelings he would inspire, emotions that make her ready to abandon her rigid beliefs, and the only family she’s ever known—when William’s life is on the line….

Sarah was sweet enough to share an excerpt with us. Check it out!

If she lived to be a hundred, Alice never wanted to attend another wedding, particularly not as the bride. The odor of roasting meats almost undid her, and she took a long draught from her water goblet. A bride did not vomit all over her wedding feast.

Her father, face ruddy with wine, sidled up and pinched her side. “God’s teeth! Smile, you stupid wench. I have found you a good ‘un this time. Far better than a butter-face like you could hope for.” Goblet held high, he strode away, sprinkling wine across the heads of those he passed. His forced laughter grated on her ear.

To her right, her groom drank from his goblet. In a deep, smooth voice, he murmured to his mother on his other side. As he shifted, his muscular thigh pinned her skirt to the bench.

He inclined his head with a smile, moved his leg, and freed her skirt. “I beg your pardon.”

God save her from her beautiful husband. “No matter.”

“May I serve you more water?” Eyes deeper blue than the lake beneath the castle twinkled at her. Candlelight gleamed off his dark hair and clung to his finely etched face.

With another smile, he turned back to his mother.

She would prefer if he did not smile so much. Or did not smell so appealing. His subtle woodsy-sweet spice teased her every time he leaned nearer. He did quivering things to her innards. How could she hope to hold a man such as this? Atop the scarred table, their trencher sat between them, still full of mutton, gravy oozing into a brown puddle on the table. It couldn’t be worse. Her father had outdone himself this time. Three husbands he’d chosen for her and this one, by far, the most daunting.

Aye, but William of Anglesea would make fine children. Tall, strong boys, broad and powerfully built like their sire, and girls to take after his mother and sisters. A child of her own. A downy head nestled against her breast, a tiny body cradled in her arms. She touched her palm to her flat, empty belly, and put her hand back on the table before anyone could notice. Even butter- faces had dreams.

A jester before the dais capered about, ringing his bells and doing his best to enthuse the assembly with joviality. Poor man raised only titters of amusement. He must have come with her father for the wedding, for they had no resident jester at Tarnwych. A few determined souls cheered the jester on his way, and a band of minstrels took his place. The cheery pipes led the lutes into songs praising the bride’s beauty and the groom’s virility. Could they not spare her those? She’d wager the minstrels would change their songs when they left for the inn tonight.

The bawdy ballad of Alice of Tarnwych and William of Anglesea. She made up her own words to the cheerful wedding song the minstrel band warbled.

The peacock ruts with a dull, brown wren,

The peacock ruts with a dull, brown wren,

William, the peacock, with his striking looks and finery had stood beside her in the chapel, and the top of her head had only reached his shoulder. How the ladies in attendance had sighed as he dipped his dark head and recited his vows to her, the dull, little wren in her brown wool dress with her atrocious hair confined to a wimple. Both William’s sisters boasted glorious flaxen hair the hue of summer wheat, not brazen red. Willowy and graceful they glided in rich, silk slippers like butterflies, whilst she stomped around in her sensible clogs.

Sister Julianna leant in and kept her voice low. “This is a bad business. This family is sown with wild, spoiled seed.”

Then there was that. Whispers of the taint on Sir Arthur’s beautiful family carried even this far north.

“It is time.” Gracious and lovely, Lady Mary of Anglesea rose with a sweet smile for Alice. “Shall we?”

“Aye, let us get to the meat of the matter.” Smug grin eating his face, her father thumped the table.

Rising too, Sir William offered his hand to her. Grip warm and sure, he helped her climb over the bench, then straightened her skirts for her. No fault could she find with her groom’s manners. As far as she could see, he had no faults at all. Men like William should marry their faultless equals. How different would this be if she looked like his mother and sisters? If she could enter his bed with her head held high, confident in her groom’s delight in her beauty.

The other women stood with her. Lady Faye, flawless and serene in her pregnancy, golden hair framing her enchanting face. Her second new sister-in-law, Beatrice. Bea, they called her, and on occasion Sweet Bea. Not as fair as Faye, but her pretty countenance made more so by the lively march of humor across it.

God mocked her by surrounding her with all this overbearing comeliness.

“Come along, then.” Beatrice’s smile stretched false with forced good cheer. Nay, they no more welcomed this match for their brother than she did.

Another wedding night and she would endure.

Swoon! If that didn’t make you want to run out an grab a copy, I don’t think you have a pulse, lol. Pick up Conquering William at: Amazon, iBooks, Kobo, and B&N. 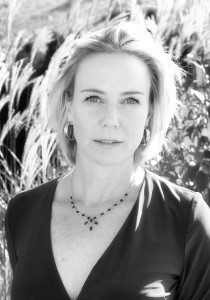 Born British and raised in South Africa, Sarah Hegger suffers from an incurable case of wanderlust. Her match? A hot Canadian engineer, whose marriage proposal she accepted six short weeks after they first met. Together they’ve made homes in seven different cities across three different continents (and back again once or twice). If only it made her multilingual, but the best she can manage is idiosyncratic English, fluent Afrikaans, conversant Russian, pigeon Portuguese, even worse Zulu and enough French to get herself into trouble.

Mimicking her globe trotting adventures, Sarah’s career path began as a gainfully employed actress, drifted into public relations, settled a moment in advertising, and eventually took root in the fertile soil of her first love, writing. She also moonlights as a wife and mother.

Sarah is the recipient of the 2015 EPIC Award for Historical Romance. She is represented my Nalini Akolekar of Spencerhill Associates.

To enter, simply become a subscriber to her quarterly newsletter. If you’re already subscribed, or wish to gain additional entries, leave a comment on one of the two blog posts below:

Writing and Research in Historical Fiction: A Peek Into My Method and My Madness

See you next time, dears…