You are here: Home / Main / Are You Ready to be Gone With the Dead? 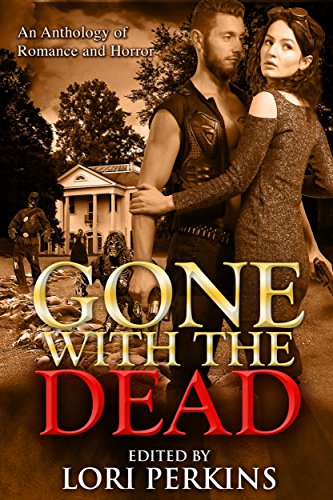 Hello, my lovelies! I’m back from a fun but exhausting RT Booklovers convention and I have a brand new project to tell you about! Gone With the Dead is an anthology of romance and horror where Gone with the Wind meets The Walking Dead!

When a convention of more than 4,000 romance writers and readers descended upon Atlanta Georgia, it could only mean one thing…a mash-up of two of the finest Georgia traditions.

The colors hit first, swaths of dark, vibrant brights, and everything between. Colors they had no name for on the celestial plane. Adea knew the names of the things, but not the colors themselves.

Then there were the sounds. Wind was wind, but softer somehow. The very sounds of life overwhelmed Adea. So many hearts beating. So many voices.

Landing atop the listing waves of an ocean, Adea looked down at the corporeal form which contained them. Long appendages stretched toward the water, dark and smooth as a starless night. Adea willed them to move, and they did, like ribbons of space undulating in the open air. There were more on the sides, and Adea moves those too. A curious sensation, Adea could feel the wind brush against these extremities. How odd, to feel that all the time as humans must. How distracting it must be.

But it was pleasurable, like being caressed by the breath of God.

The rest of the form baffled Adea. Soft curves, and even more dark, smooth flesh.

Names, words, definitions. Adea lacked them all. This was unacceptable. It had been millennia since they had inhabited the earthly realm, had come into contact with the life there. Adea had forgotten all that they had ever known about the place. Unacceptable.

Man was clever, though, and he had cast his existence into the universe like a net. Ready to trap anyone that ventured close.

Adea allowed the net to settle over this body, let the information seep into the cells.

Languages. Du er ikke alene. So many. The only thing to fear is fear itself. How could these beings communicate? Je t’adore.

A lot of that one.

But also love, joy, pleasure – so much pleasure.

Adea looked down at this body and realized it was female. Interesting. He was male. She was female. And so, Adea was female. A she. She, her. Very confining.

Adea moved her limbs again and brought the things called hands to the thing called her face. Moved them down this body, over the things called tits. Breasts. Boobs. So many words for them, but soft was Adea’s word. This body was soft and pleasing to touch. Stroking certain areas sent ripples of sensation across a thousand nerve endings. Maybe it wouldn’t be so horrible to stay in this form while on earth, she thought.

Willing herself to move, Adea floated down closer to the ocean. Water lapped at the ends of her legs. Feet. Toes, they were toes. Adea touched the toes to the water and registered the cold, the energy traveling through her like an electrical current. Gathering that energy, pulling it toward her, Adea fed and felt her mind clear.

She knew where she was and when, and she knew the one she had come to claim was close. Adea gathered nature’s will around her and went off in search of her target.

It didn’t take long to find him.

Stars were beautiful, dotting the velvet curtain of the universe like musical notes. They were, after all, the jewels of the universe. Chalices of light. Adea might not admit it on the celestial plane, but fallen stars burned brighter. And fallen stars would attract the hedonists. The sybarites. The lonely. The lost. The lustful.

This body’s lust led her right to him. An aching between her thighs that pulsed, driving her along the river to where he sat. Waiting, whether he knew it or not.

Gone With the Dead contains these brand new stories:
Christina and the Virus by Sarah Bale
A Dead Man is Hard to Find by Ellay Branton
A Piece of Him by R. L. Merrill
A Happy Medium by Freddie Milano
Bait by Isabelle Drake
Bloody Line by Carolyn Haven
Devil’s in the Well by Harley Easton
A Ferocious Blossom by Marie Piper
Kissing Summer by Megan Hart
If I Only Knew By Genevieve Williams
Animals by Sue Ayers
Dogs of War by Andrew Robertson
The Music Man by Kimberlie L. Faye
Fallen by Xio Axelrod
Leftovers by Cassandra Chandler
Here for You by Kate L. Mary

Grab a copy on Amazon and Smashwords!