You are here: Home / FOX / FoX Friday with Sandra Bunino

Happy September, my lovelies! I’m back with another brand new FoX for FoX Friday! Help me welcome Sandra Bunino to our little corner of the interwebs.

Sandra is an author of romance who stays up too late dreaming up sexy heroes. When she’s not writing, shoe shopping, or saving wayward turtles, Sandra can be found with a cup of coffee browsing the shelves of an indie bookstore. As a social media junkie, Sandra loves to chat with readers and formed the Bookalicious Babes Facebook group where members share their love of books. Sandra also writes as Sandra Renee Appet. She’s here with her newest release, PLATINUM and you have a chance to win a signed copy! First, I took the opportunity to ask Sandra some fun questions.

Hi Sandra! So glad you could join us for FoX Friday.

Thanks for having me, Xio!

How do you celebrate each book release?

With a nice glass of Merlot and the satisfaction of completing another book and sending it into the world. It always amazes me how much work, love, sweat, and tears go into a book.

I know what you mean! And that sounds like the perfect way to celebrate. 🙂 How many hours do you spending writing each day?

Oh boy. This varies day-to-day since writing is my side hustle. I have a pretty demanding day job so there are days when no words are written. But I do what I can and sometimes I find unexpected pockets of time when words flow … and that is pure magic.

Absolutely. Do you have any writing rituals that help to get your mojo flowing so you can write?

Clearing my mind though meditation really helps. Creativity is fostered with a calm mind.

I agree! Sometimes, I’ll close my eyes and put on some music just to refocus. Tell us, do you have a favorite hero/heroine you’ve written? What makes them special?

Okay, I’ll tell you, but don’t tell the others! Michelle from Colors of Us is probably my all-time favorite. I love her journey and am proud of the person she became at the end.

Awesome! Adding her to my TBR list, and you’re secret is safe with me. 😉 What do you do in your downtime?

Travel! I want to go to all the places. I’m headed to Italy for an epic girls’ trip in two weeks!

Ahhh! I’m so jealous. I’m dying to go to Italy. Tell me your favorite pick up line, and did it work on you or for you?

Hmmm … well, when I stepped off the train some guy told me he liked my dress in a sweet, not creepy way. Does that count?

Sure does! What would the title of the movie about your life?

“Slaying Life with Cute Shoes and a Latte”

LOL, love it! What can readers expect from you next?

When reporter Stacia Howell follows a hot tip to Vegas, she doesn’t expect to end up running for her life—or to be scooped out of harm’s way by a towering mass of muscle with an icy attitude and a penetrating gaze.

Walker runs on two speeds: Intense and Highly Intense. His plane is emblazoned with the name of the mysterious organization she’s been investigating—Platinum. And a single touch makes her body buzz with the raw desire to lay herself bare before him.

Walker knows Stacia’s game. Hell, he invented the game. She’s oblivious to the danger she’s in. Yet she makes him want to leave his imprint on her skin, and wring sounds of passion from her lips. One night of warm leather and straining chains, and he realizes she is his and his alone. But when he’s backed to the edge of a cliff, the only way to keep her safe could be to let her go. Forever.

Sandra brought an excerpt, guys! Check it out.

“Who’d you think you were dealing with?”

“Not the mafia,” she spat. “Why would I fly to Vegas with a mobster?”

“That question crossed my mind. Tell me what you know about him.”

Stacia took a long sip from her glass. Here we go. She’d wondered when he’d start the interrogation. “Don’t you mean tell you what I know about Platinum?”

His mouth quirked, but he didn’t say a word. They stood a few feet from each other in silence. Stacia knew his tactic. Silence was the first lesson of Reporting 101. Most people try to fill moments of awkward silence with words. The first person to speak loses the advantage.

Advantage Stacia. She straightened her back. “I presume that’s who you work for. Name’s on the plane. Why don’t you cut the shit and ask me what you really want to know?”

His eyes locked with hers, but she refused to look away. “Why did you go to Vegas with a man you didn’t know?”

“For a story that would’ve jumpstarted my career.”

“The only thing he’d say was it was about Platinum, that he was a disgruntled employee who wanted to get even. He hinted there was something going on in the sudden crop of clubs Platinum opened, like The Silver Club in Vegas. He said if I joined him at the opening of the club I’d get my story.”

“The Silver Club isn’t Platinum’s. It’s owned by the Cardinellis.”

She shook her head. “I did my research. Platinum bought the property.”

“You didn’t finish your homework. Platinum bought it but resold it to Carlo Cardinelli.”

“It must’ve been recent because it didn’t show up on my search.” She tilted her head. “The real question is why would a security and national defense company buy a nightclub and sell it to a known mobster?”

Ice cubes clinked against his glass as he gave it another swirl. “It was necessary. Dealing with Carlo is a calculated game of give and take. We may have given him the club, but today we took you.”

“It still doesn’t make sense. And if it’s a Cardinelli club, why would they risk turning the attention on themselves?”

“Not sure, but Jake’s job was to lure you there for some reason.”

“Why me? If exposure was what they were after wouldn’t they contact a reporter with more clout?” Stacia had no doubt she would be one of those reporters in time, but as a junior reporter she still had to beg for fluff pieces.

“They wanted someone green because they knew you’d keep it quiet. You’d want the story for yourself.”

She leaned against the cabin wall and closed her eyes, angry for letting her drive for success overshadow common sense. She’d played right into Jake like an idiot.

“What happened at the hotel before you left?” Walker asked.

Stacia rubbed her forehead as she tried to recall the details of the last moments in the Vegas hotel suite. “We checked into adjoining suites. I didn’t want connecting rooms but he insisted and said I could lock my side, so I agreed. I noticed the adjoining door was open when I was getting dressed for dinner. He must’ve been in my room when I was in the shower. So, I marched over to his side to rip him a new asshole and heard him on the phone in the bedroom. He said he had me and if I gave him trouble he’d take care of it. I realized I was in over my head and no one knew where I was. So I went back to my suite and left.” She paused, realizing how she’d let her ambition cloud her common sense. “You must think I’m stupid.”

“But you’re thinking it.”

“You didn’t tell anyone where you were going? Your boss? Your father?”

She shook her head. “I knew my boss wouldn’t agree on it, so I took a couple days off and went on my own time. I figured if I came back with the story, I’d be a rock star. You know the saying: ask for forgiveness, not permission. Taking chances is part of the business. It was the chance I took.”

“What about your father? Why didn’t you tell him you were going to Vegas?”

Stacia gazed out the window. “My father believes in doing things by the book. He wouldn’t understand. He’s not pleased with my career choice, and he hates Las Vegas, almost as much as he hates LA.”

Her father was a brilliant man. General Howell reminded her of that fact with every wrong move she made. If he had it his way she would’ve gone to law school and joined a practice in Cleveland.

Walker drained his glass and placed it on the counter. “Look, I don’t know why they lured you to Vegas, but it wasn’t to break open some story. There isn’t one to report.”

“Maybe. But there is one now.”

He pinned her with a heavy stare. “There’s no story.”

She chuckled. “I’m being kidnapped by one of this country’s most powerful and mysterious corporations and there’s no story? Bull. Shit.”

Pick up a copy of PLATINUM today and leave a comment or question for Sandra to be entered to win a signed copy!

CAMDEN was awarded a Bronze Medal in the 2018 Readers’ Favorite Awards, in the Romance – Contemporary genre! 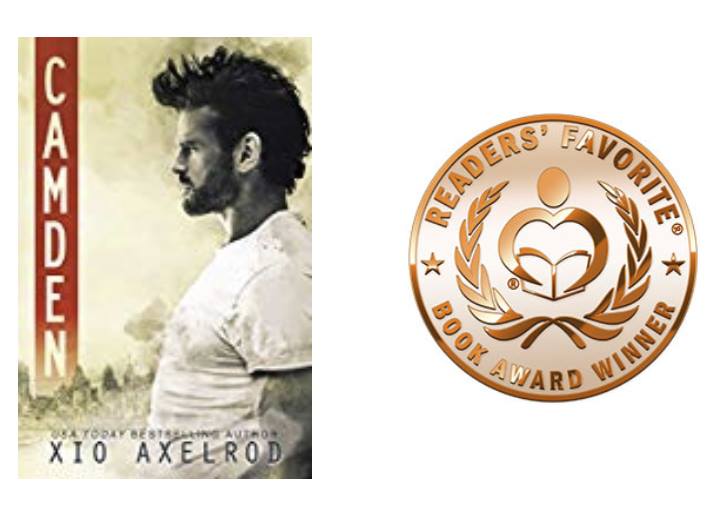